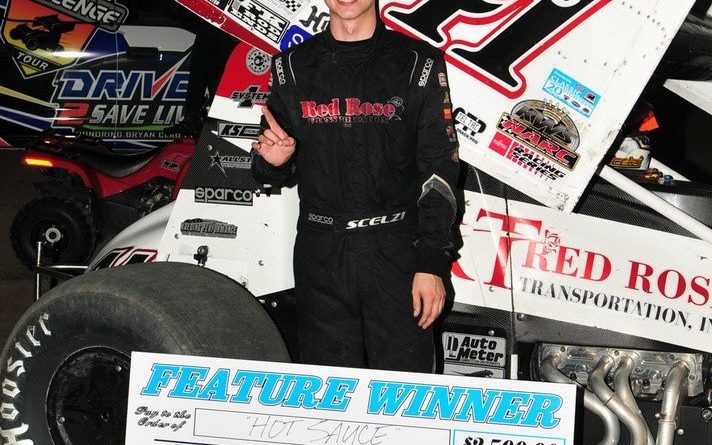 Scelzi had come close to a Sprint Car Challenge Tour victory in Stockton on April 14, only to have older brother Dominic get by late in the race. On Friday he drove a great 30-laps out front and withstood an early challenge from Kyle Hirst to take home the $2,500 win aboard the Scelzi Enterprises/ Red Rose Transportation No. 41 machine.

“It feels great to come out here and win at the Peter Murphy Classic tonight,” Scelzi commented. “Peter puts so much effort into this event, I know everyone really appreciates it. With the track taking rubber I focused on saving my tires and running a smooth race. I want to thank everyone that helps on this 41 team. We have Bernie from Indy Race Parts out here helping this weekend and we had the car really good all night.”

Scelzi got the jump on the field at the waving of the green flag and led the 24-car field over the early stages, as Kyle Hirst and Bud Kaeding worked a higher line on the raceway trying to battle their way forward. The surface had taken rubber prior to the SCCT feature, but Hirst was able to make the higher line work and charge from eighth to second, before carving his way past Scelzi around lap five. Just as he did that however, the yellow lights flashed on and saved the lead for Scelzi.

A number of yellows and a couple red flag periods slowed the flow of the race, but nothing would slow the fast moving Scelzi after that, as he went on to take the checkered flag for his second career Thunderbowl Raceway win. Hirst came home second, with Fremont’s Shane Golobic, Visalia’s Steven Tiner and Minden, Nevada’s Tanner Thorson rounding out the top-five.

Becker earned the Pit Stop USA Hard Charger Award coming from 23rd to eighth in the feature. Along with the $200 certificate from Pit Stop USA he also earned $500 cash courtesy of Dirt Co Media.

Hollister’s Tony Gualda captured the 15-lap Finley Farms B-main and earned a free right rear tire courtesy of Hoosier. The two C-mains were claimed by Tucker Worth and Colby Johnson. Gio Scelzi won the six-lap Race Punk Dash, while the All-Star Performance heat race was picked off by Hanford’s DJ Netto, the A.R.T. Speed Equipment heat was won by Bud Kaeding, the Autometer heat went to Hanford’s Mitchell Faccinto, the Winters Performance heat was won by Cole Macedo and the RMI heat went to Justyn Cox.

The Sprint Car Challenge Tour presented by Elk Grove Ford and Abreu Vineyards will have a few weeks off before resuming action on Saturday June 16 at the Keller Auto Speedway in Hanford.

More information on the Sprint Car Challenge Tour presented by Elk Grove Ford and Abreu Vineyards can be found at our official website www.sprintcarchallengetour.com – Be sure to also like us on Facebook https://www.facebook.com/sprintcarchallengetour and follow on Twitter https://twitter.com/360SCCT for the latest breaking news regarding SCCT.