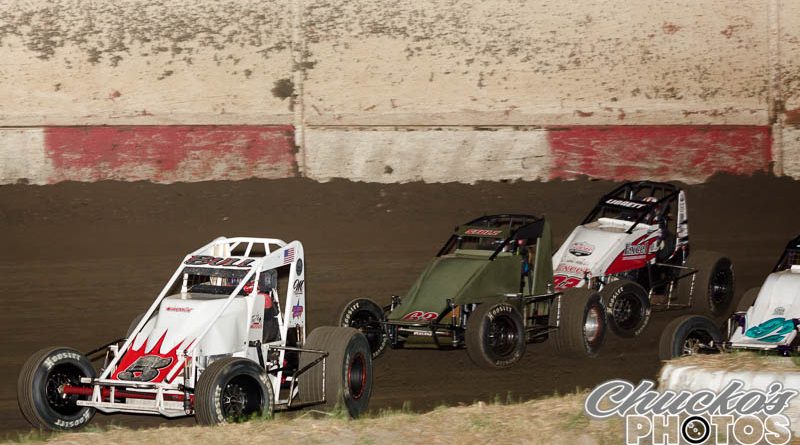 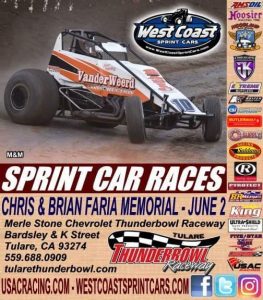 MAY 29, 2018… This Saturday, June 2nd, the USAC West Coast Sprint Cars will make their fourth and final appearance of the year at Tulare’s Merle Stone Chevrolet Thunderbowl Raceway. Promoted by Steve Faria, the “25th Annual Chris & Brian Faria Memorial” will also feature the King of the West–NARC Sprint Cars and the Western RaceSaver Sprint Cars. The front gates will open at 4:00pm, time trials at 6:00pm, with racing scheduled for 7:00pm. For more information, visit the track’s website at www.tularethunderbowl.com or call 559.688.0909.

NOTICE TO RACERS: FRONT AXLE TETHERS ARE MANDATORY ON JULY 1ST. The Hoosier 105/16 Medium is the ONLY legal right rear tire and all four corners must be Hoosier. Cockpit adjustable shocks are NOT allowed and engine restrictor rules are 1-7/8” with open heads and 2-3/16” with ASCS cylinder heads. The weight rule is 1,475 lbs. with driver and the USAC West Coast Sprint Car Rule Book can be found online at www.westcoastsprintcars.com and www.usacracing.com. USAC MEMBERSHIPS can be purchased at the track or online at https://usacracing.redpodium.com/2018-usac-sprint-midget-sc.

The “Chris and Brian Faria Memorial” is one of the most prestigious dates on the USAC West Coast schedule. This year’s event marks the twenty-fifth running of the race and Peter Murphy won the inaugural non-winged 360 memorial in 2009. Last year, Ryan Bernal used a late race charge past Kyle Hirst to earn his second Faria victory. The winner’s list of the Faria Memorial is at the bottom of this release.

Since March 6, 2010, the Tulare County Fairgrounds has hosted thirty-nine USAC West Coast Sprint Car races. Ryan Bernal leads all drivers with fourteen victories and topped the March 9th visit. “Hollywood” Danny Faria Jr. (May 18th) and Richard Vander Weerd (May 19th) claimed wins during the “Peter Murphy Classic.” Jake Swanson set the 1-lap qualifying record of 14.984 on March 17, 2017 and the series win list at Thunderbowl Raceway is at the bottom of this release.

Entering the seventh point race, Austin Liggett (Tracy, California) sits atop the standings with a 32-point lead over the competition. Racing the family owned #83 Excel Environmental Services / Lucas Oil Maxim, Liggett scored fourth at Tulare’s “Peter Murphy Classic” finale on May 19th. To date, the 2012 Rookie of the Year has one heat race victory, five top-10 finishes, and 28 feature laps led to his credit. Austin has five career wins and will be looking to add the “Faria Memorial” to his resume.