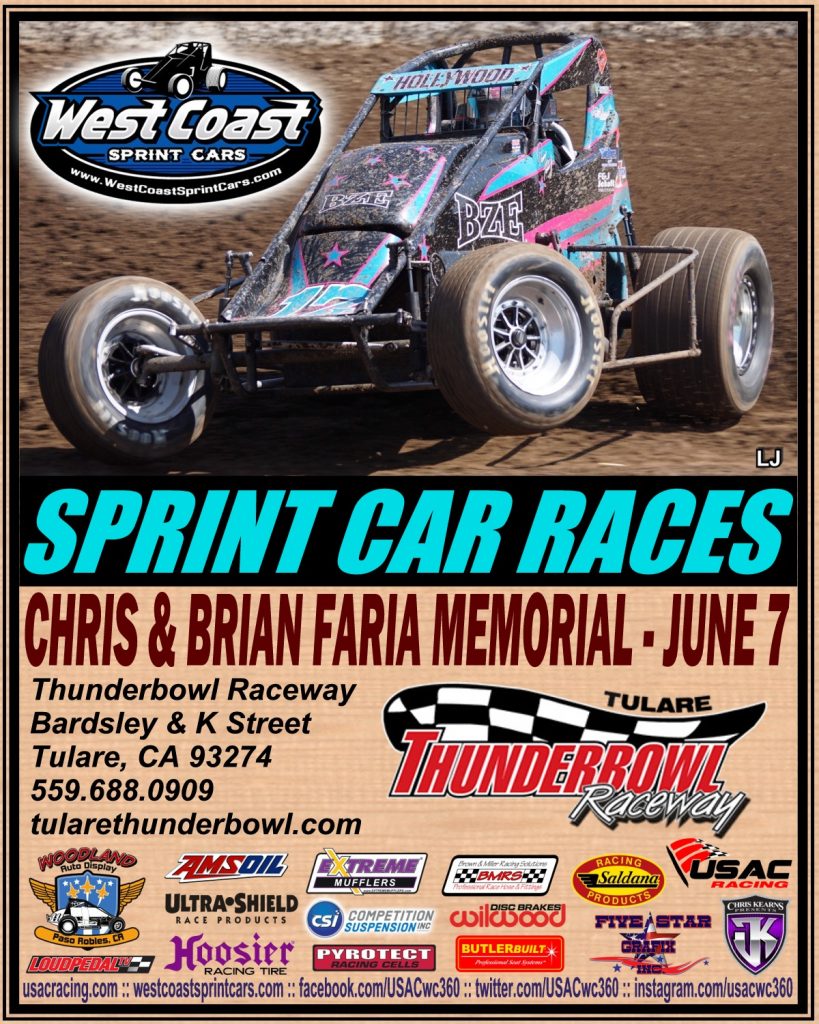 JUNE 3, 2019… After a hard fought battle at Ventura, the USAC West Coast Sprint Cars will invade Tulare’s Thunderbowl Raceway this Friday, June 7th. Promoted by Steve Faria, the “Chris and Brian Faria Memorial” was moved after rains washed out the final night of the “Peter Murphy Classic” on May 18th. The second and final appearance of the non-winged 360s at the Tulare County Fairgrounds will also showcase the Kings of Thunder Sprints, Western RaceSaver Sprints, and IMCA Stock Cars. The Front Gates will open at 3:00PM, Time Trials are scheduled for 5:30PM, and Racing will start at 6:00PM. For more information, visit the track’s website at thunderbowlraceway.com or call 559.688.0909.

The “Chris and Brian Faria Memorial” is one of the most prestigious dates on the USAC West Coast schedule. This year’s event marks the twenty-sixth running of the race and Peter Murphy won the first non-winged 360 memorial in 2009. Last year, Tristan Guardino added his name to the winner’s list, which is at the bottom of this release.

Since March 6, 2010, the Tulare County Fairgrounds has hosted 42 USAC West Coast Sprint Car races. Ryan Bernal leads all drivers with fourteen victories and Jake Swanson set the 1-lap track record of 14.984 on March 17, 2017. Austin Liggett topped the “Peter Murphy Classic” on May 17th and the Tulare series win list is at the bottom of this release.

Entering the eighth point race, there have been six different winners. Defending series champion Austin Liggett has two victories, while Brody Roa, Swanson, Chase Johnson, Guardino, and Troy Rutherford have one win in the campaign. Rain washed out the May 18th event at Petaluma.

Slater Helt (Harrisonville, MO) has climbed to fourth in the chase for the championship. Driving Steve Watt’s #81M Maxwell Industries / Steve Watt Enterprises Maxim, Helt scored twenty-second at Ventura after having mechanical issues ended his night. To date, the leading rookie contender has posted one Wilwood Brakes Lucky 13 Award and one top-10 finish in the campaign. The Missouri driver will have his sights on his first USAC West Coast victory this Friday night.