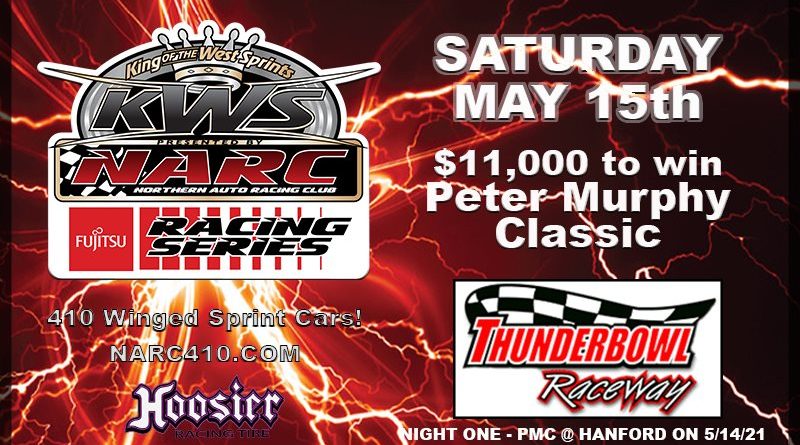 $11,000 TO WIN PETER MURPHY CLASSIC AT TULARE NEXT UP FOR NARC 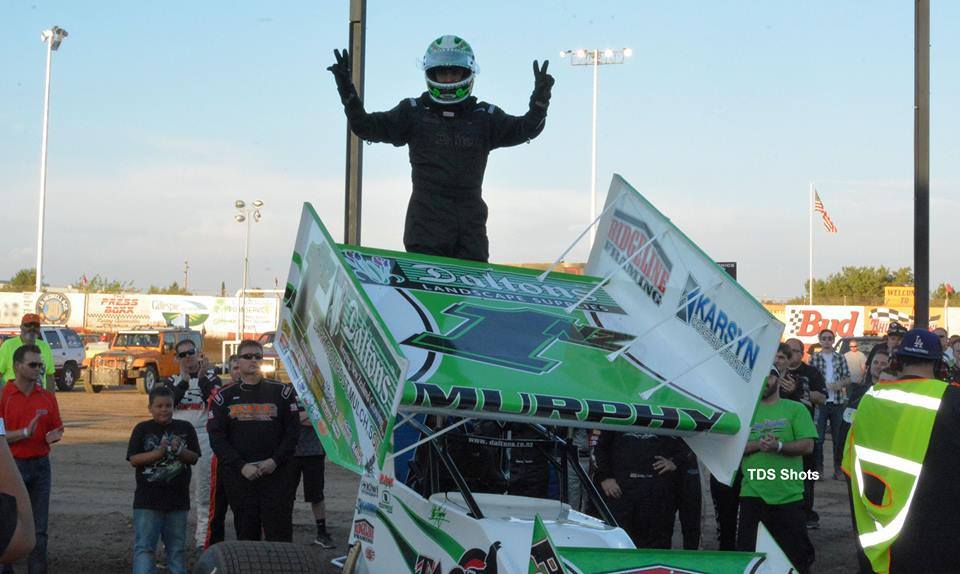 (5/10/21) Sacramento, CA …  Following a nearly two-month break since the season opener, the NARC King of the West Fujitsu 410 Sprint Cars travel to Tulare’s Thunderbowl Raceway this Saturday May 15th for the Seventh Annual Peter Murphy Classic.

The event is Peter Murphy’s way of giving back to those who supported him following his career-ending accident in 2013. The former competitor out of Australia was a versatile and potent driver in his time, frequently visiting victory lanes along the west coast. He now organizes this event that, in addition to offering a generous purse, helps raise money for the NARC Benevolent Fund, the not-for-profit that helped during his recovery process.

Nearby Keller Auto Speedway, promoted by none other than Peter Murphy, kicks off the two-night show on Friday May 14th, headlined by the Sprint Car Challenge Tour 360 Sprint Cars. Joining the SCCT will be the Kings of Thunder 410 sprint cars. On Saturday in Tulare NARC shares the card with the Kings of Thunder 360 sprints, Western RaceSaver 305 Sprints and the Legends of Kearney Bowl.

Thunderbowl Raceway should offer some intense, white-knuckle action this Saturday as the talent of California’s premier 410-winged sprint car series invades the Tulare County Fairgrounds. The drivers will be aiming to nab one of the calendar’s biggest checks as the Peter Murphy Classic awards $11,000 to the victor.

Defending NARC champion DJ Netto holds an early season points lead after dominating Stockton’s Salute to LeRoy Van Conett in March to earn his fourth career series victory. On top of winning races, the Hanford native continues to be NARC’s model of consistency, only missing the top-10 once in his last fourteen feature events. Hoping to begin his title defense by going two-for-two, he’ll be seeking his first KWS win at the Thunderbowl since May of 2015.

There will be many other hungry competitors joining Netto in the hunt for the $11,000 prize, and a handful stand out as potential favorites.

Tim Kaeding is a proven force at the Thunderbowl. The driver out of San Jose has earned four of his twenty-one career World of Outlaws wins in Tulare. A victory for TK this Saturday would make it 69 career NARC triumphs.

Winner of the 2018 Peter Murphy Classic, Shane Golobic, will certainly be in the mix. The two-time Trophy Cup champ has an outstanding average finish of 2.8 in his last four NARC feature starts at the Thunderbowl. Look for the Matt Wood Racing number 17 to be toward the front on Saturday.

Paradise native Kyle Hirst is a key name to watch. The four time titlist has five series victories at the Thunderbowl since 2016, more than any other competitor.

Former NASCAR driver Kasey Kahne will be competing on both Friday and Saturday. The three time World of Outlaws champion team owner is reuniting with Roth Motorsports to pilot their iconic number 83 machine.

A driver hoping the Peter Murphy Classic will bring his first NARC win is Iowa’s Austin McCarl. The 2018 Knoxville track champion continues to get comfortable aboard the Tarlton Motorsports number 21 after opting to follow the King of the West tour this season. He impressed in Stockton, smoothly rolling the bottom to a top-five finish after starting mid-pack.

The few names listed above plus many others should be filling the pits this Saturday. Bud Kaeding will be aiming to become the first driver to claim two Peter Murphy Classic wins. Other expected entrants include Dominic Scelzi, Justin Sanders, Willie Croft, Mitchell Faccinto, Sean Becker and more. The event has been one of the most well attended for NARC over the past few seasons, averaging 32 sprint cars since 2017.

The fastest qualifier will receive $600 courtesy of Kimo’s Tropical Car Wash and ARP.

Gates are slated to open at 4 P.M. Saturday with qualifying kicking off at 6 P.M. The price tag for a pit pass is $40. Grandstand tickets for adults are $30 while the bleachers cost $25. Seniors can access the grandstands for $28 and the bleachers for $23. For kids ages 6-12, grandstand admission is a mere $15 and the bleachers are only $13. Kids 5 and under are free.

If you can’t make it to the track, you can watch the Peter Murphy Classic live on FloRacing along with the entire NARC King of the West Fujitsu Sprint Cars schedule.