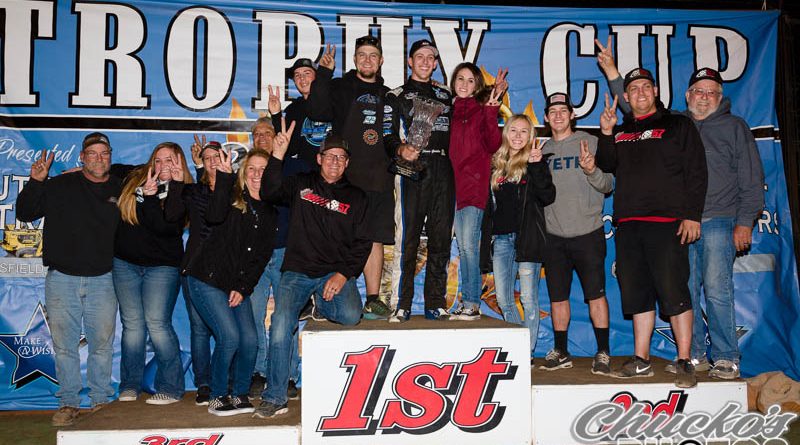 Tulare, CA…It has only been done one time before Saturday night, but Shane Golobic became the 2nd driver to win back to back Trophy Cup titles. Brent Kaeding accomplished the feat in 1998-99 events at San Jose Speedway. Golobic has now matched that by winning the 2017 Cup title for two consecutive at Tulare Thunderbowl Raceway.

The format for night 3 has the top 48 in points running six fully inverted heats. The heat wins earned 36 points with a 3 point drop per position.

Golobic took a 4th to help his cause, but it was Dominic Scelzi’s 3rd that pushed him into the point lead. The top 20 in points following the heats went directly to the A main while the rest moved to a C or B main.

Scelzi’s point status earned him the 20th starting spot for the 50-lap main that inverts 20 by points. Tanner Thorson, Carson Macedo, and Jason Solwold were tied in points, 3 behind Scelzi, and filled rows 10 and 9. Golobic started 15th, 7 points behind Scelzi for the main that earns 150 points to win with a 3 point drop.

By turn 2 of the first lap, the race changed its look when a tangle eliminated Jonathan Allard and caused damage to Scezli’s car when both flipped while Macedo, Jason Meyers, and Steven Tiner all pitted to fix various items.

Only Allard was done for the race but the revised lineup now had Golobic 12th on the grid and Joey Saldana started 13th. The race for the Cup title would eventually be between those two.

Golobic got past Saldana on lap 16 but 3 laps later Saldana returned the favor to regain the point lead. With 15 laps remaining, Saldana had two cars between himself and Golobic and looked as if he was heading for the title. But after a lap 35 restart Golobic erased the two car cushion and then passed Saldana after another restart a lap later.

Once ahead of his challenger, Golobic continued to move forward to finish 4th at the checkers. Willie Croft, car owner for Saldana’s ride, made late race progress and finished 3rd to take 2nd in points, pushing Saldana to 3rd in the final point totals.

At the front of the pack, it was a duel between Bud Kaeding and Ryan Bernal for most of the 50 laps. Following the red with no laps scored, the race had just 4 yellows plus a mandatory red for fuel after a lap 28 yellow.

Tim Crawley led until Bud Kaeding used a topside drive out of turn 4 to take over on lap 4. Bernal moved into 2nd on lap 19 and the battle between them started. The racy 3/8 produced some excellent racing between the pair and it was Bernal who led the last 20 laps to win with Kaeding 2nd, then Croft, Golobic and Tim Kaeding completing the top 5.

Golobic collected $20,000 for the Cup championship while Bernal won $3500 for capturing the main. The 2018 Trophy Cup is set for October 18-20 at Tulare Thunderbowl and will pay $25,000 to win the title plus all Saturday main event starters are guaranteed $5000 total for the three days combined.