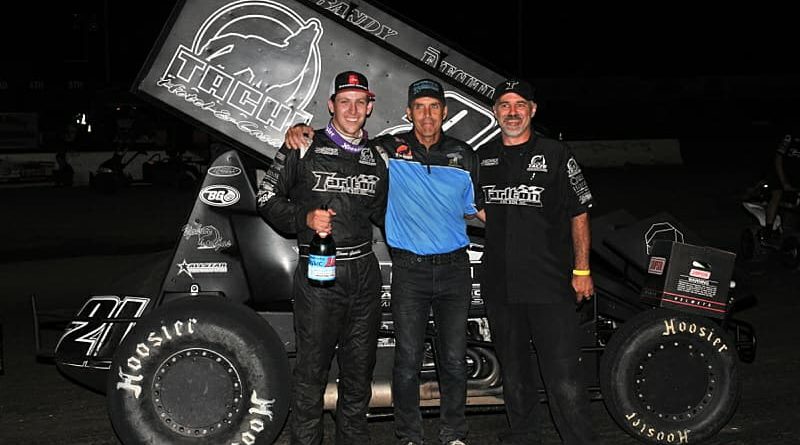 Golobic, who started 12th in the grid aboard the Tarlton Motorsports Tachi-Palace KPC, methodically maneuvered his way through the field into third place on a “rubber-down” dirt track with only four laps remaining.  However, it was a caution flag on the final lap that provided the opportunity to score the victory.  On the green-white-checkered restart, Golobic proceeded to motor past both race leader Hirst and Kaeding going down the backchute to take the point.

Fighting failing tires and an ill-handling car, Hirst went to the bottom of the track to block Kaeding who had a run on him coming out of the second turn.  As the two frontrunners moved down, Golobic took the high line and powered to the lead, which he held the final lap.

“Sometimes it’s better to be lucky than good, “stated a very happy Golobic on the victory podium, sporting a champagne shower and the cherished $11,000 Peter Murphy winner’s check.  “I was going to be happy just running third up to that point.”

Hirst wedged his way past Kaeding on the 14th circuit to take the lead and seemed to have the race under control despite constant pressure from Tanner Thorson and defending series champion.  On the final lap, the car of Mathew Moles banged the wall several times exiting turn four and began to swerve down into the path of the oncoming field, who were midway through the fourth corner.  The yellow flag was waved forcing a restart, setting the stage for the wild two-lap dash for the cash.

Kaeding, driving the Williams Motorsports Alviso Rock Maxim, got around Hirst on the final lap to score second.

Hirst was not a happy camper on the podium after crossing the line in third aboard the Roth Motorsports KPC.  He banged on officials for not throwing the checkered instead of the caution flag.

Running up front wasn’t exactly advantageous for a few teams.  Australian Matt Dumesny rode the wall and crashed hard while running second on lap six aboard Rod Tiner’s sprinter.  He was unhurt.  Thorson was all over the leader for most of the contest, until he pulled into the infield with a shredded right rear with only three laps to go.

Willie Croft drove his Amerkote EMI across the line in fourth, chased by sixth starter Tim Kaeding in the 83JR Roth Motorsports ride.

Sean Watts was also a red flag recipient in the feature hitting the frontstretch wall and turning over.  He walked away under his own power.  Richard Brace Jr. and Ryan Souza both flipped in separate accidents in the second heat.  Both were unhurt.

Kaeding set the standard in qualifying as the only driver in the 34 car field in the 13-second bracket (13.992).  He started on the pole after claiming the Sunnyvalley Bacon Pole Shuffle.