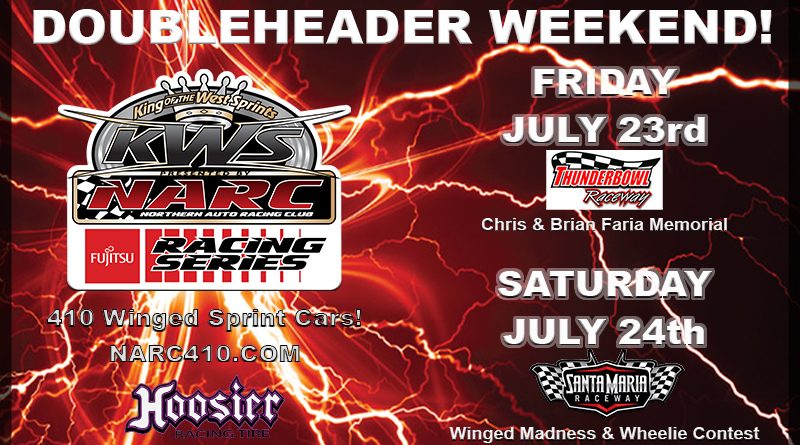 (7/19/21) Sacramento, CA … This weekend brings the second doubleheader of the 2021 NARC King of the West Fujitsu Sprint Car campaign with the “Chris and Brian Faria Memorial” at Tulare’s Thunderbowl Raceway kicking off two nights of racing on Friday, July 23rd. The following night, July 24th, showcases the “Winged Madness” night at Nipomo’s Santa Maria Raceway, in an event that will feature a Wheelie Contest.

Friday’s event in Tulare honors the two brothers of the Faria family. Chris showed promise as a racer before sadly losing his life in a farming incident in 1993. Brian helped with the operation of the Thunderbowl before he passed in an automobile accident in 2006.

Saturday’s show not only offers a full program of NARC-KWS action at Santa Maria, but also what is sure to be a thrilling Hammerdown!/Kimo’s Tropical Car Wash Wheelie Contest. Having made a habit of taking checkered flags with the front end aimed at the sky, Tim Kaeding must be the early favorite. However, he’ll have some stout competition in pursuit of the $1,000 prize.

On Friday at Tulare the NARC-KWS 410 Sprint Cars will be joined by the Kings of Thunder Winged 360 Sprint Cars and Western RaceSaver Sprints. On Saturday at Santa Maria RaceSaver Winged Sprints, Winged California Lightning Sprints and the Legends of Kearney Bowl are also on the card.

Both events should combine to provide a must-see weekend of racing. The Thunderbowl is known to provide some of the most intense, high-velocity action on the schedule. May’s Peter Murphy Classic in Tulare featured a slider-fest to decide the outcome. Santa Maria’s most recent race in 2019 saw three different leaders and an exciting final lead change with only two laps left.

Heading into the weekend, Campbell’s Bud Kaeding is looking to rebound after an Ocean Speedway DNF trimmed his point lead to just one marker. Tulare should be a place to get the 2017 titlist back on track. Kaeding has eleven top-5s in his last twelve series starts at the Thunderbowl and led the opening 23-laps of this year’s Peter Murphy Classic. Bud also scored a solid third place finish in the series’ most recent visit to Santa Maria.

The reigning series champ DJ Netto should be up front both nights as he looks to jump from third to first in the points podium. The Hanford native carries a streak of twelve consecutive series top-10s at the Thunderbowl and earned his first career series victory at the 3/8ths mile in the 2015 Faria Memorial. He’s also scored top-5s in the last two series appearances at Santa Maria.

A preview for these two facilities cannot go without mention of Dominic Scelzi. The driver out of Fresno has four Thunderbowl victories this year including an $11,000 NARC-KWS triumph as part of his Peter Murphy Classic sweep in May. Scelzi also took home the win the last time NARC visited Santa Maria in 2019. He’s just a single point behind Bud Kaeding in the championship chase heading into the weekend.

For the Winged Madness event at Santa Maria, the pit gates will open at 1:00 P.M., and the front gates will follow at 4:00 P.M. The price for adult tickets is $30. Seniors will be admitted for $28. Kids 6-12 can get in for just $6. Kids 5 and under are free. Tickets can be purchased at the gate or online via the track’s website: santamariaraceway.com.

Both events can be viewed live on floracing.com along with the entire NARC King of the West Fujitsu Sprint Car schedule. 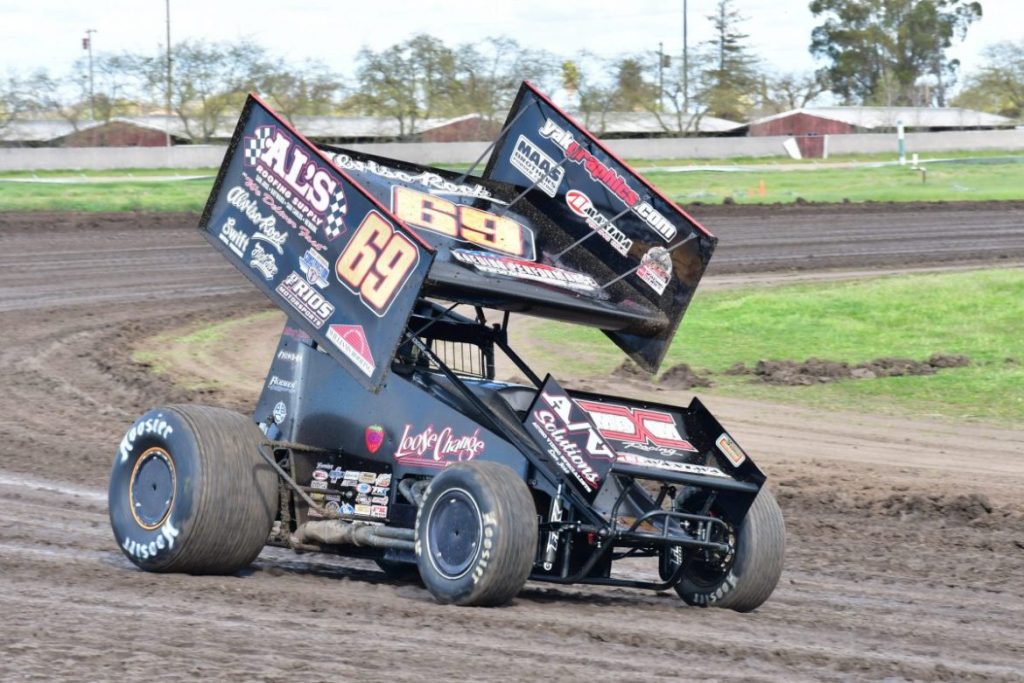